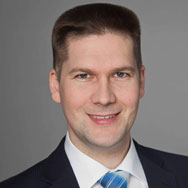 OZON.ru
Mr Vladimir Samarov
Head of Import Department
The hktdc.com Buyer Meetings service has spotted many good suppliers for us. Many of their products have become best-selling items on our website.
Spur Business with the Right Matching 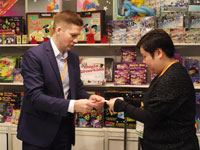 Established in 1998, OZON.ru has become one of the biggest online shopping websites in Russia, offering more than 2,200,000 SKUs spanning toys, electronics, houseware and home appliances, and the site is browsed by more than 700,000 unique visitors daily. OZON.ru recorded staggering growth of over 78% (turnover) in 2011 compared with 2010.

Mr Vladimir Samarov, the company’s Head of Import Department, has returned to utilise the hktdc.com Buyer Meetings service at the HKTDC Hong Kong Toys & Games Fair 2013 after gaining fruitful results from the companies referred by the service at Sports Source Asia and the HKTDC Hong Kong Electronics Fair, Gifts & Premium Fair, Houseware Fair and Toys & Games Fair in 2011 and 2012. 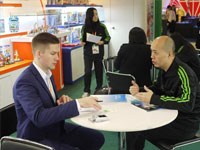 “The BM Service has spotted many good suppliers for us. We have bought speakers, iPod docks, headphones, RC helicopters, frying pans and other goods through the service, and many of these products have become best-selling items on our website. For many, we keep replenishing the products and expanding our orders,” Mr Samarov enthused.

Mr Samarov noted that OZON.ru usually starts orders with only a few items in small quantities with new suppliers, and will expand varieties and quantities based on ex-works and market response. The company placed orders of more than 10 containers after the HKTDC Hong Kong Electronics Fair 2012, and will confirm further order placements with more referred suppliers after visiting their factories on the Chinese mainland.

Matching Builds Long-term Relationship
“I am also delighted that our business relations with these suppliers do not stop at just buying and selling — we’ve developed close ties with some of them, like friends,” Mr Samarov continued.

With OZON.ru now offering a wide category of products, of which many have been sourced from TDC exhibitions, Mr Samarov noted that he feels lucky to have used the hktdc.com Buyer Meetings service.

“The contribution of the Buyer Meeting service is indeed very important to the growth of our business,” he said.

Hong Kong as the Ultimate Sourcing Hub
With a growing number of suppliers from Hong Kong and the Chinese mainland, OZON.ru will source 50 per cent of its products from the area in the coming years.

“In view of facilitating our further sourcing in Hong Kong and the Chinese mainland, we are also looking forward to setting up a sourcing office in Hong Kong. I am so glad that the TDC is also giving a helping hand,” concluded Mr Samarov.